Rhiti Charitable Foundation was started in the year 2010, with an idea of giving opportunity to young athletes from cities that have limited exposure to sports facilities. Our mission is to provide the best possible opportunities to athletes and help them in showcasing their talent. The foundation identifies support young athletes, provide scholarships and organise tournaments in different states. So far, the tournaments has been organised across various cities, such as Varanasi, Ranchi, Gorakhpur, Noida, Jamshedpur, Dhanbad, Allahabad, Lucknow and Dehradun. 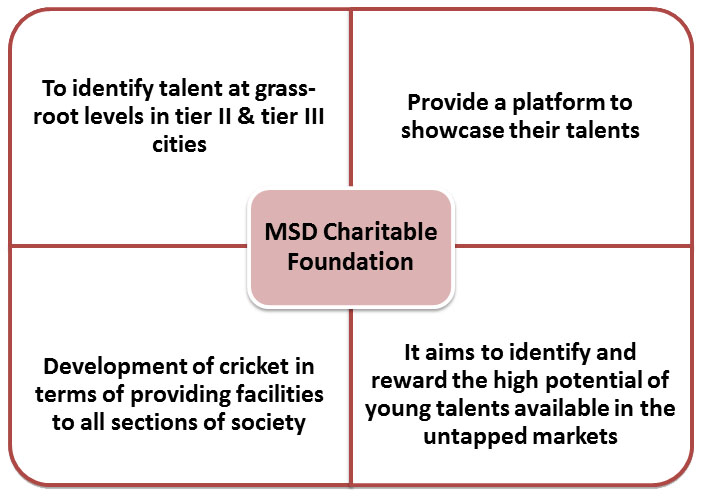 The cricket tournament series conceptualized by Rhiti Charitable Foundation encourages talents from grassroots level by providing scholarships. Athletes, who are talented, but need financial backing, for pursuing career in their respective sports are given scholarships.

Corporates have come forward to associate themselves with this cause. The tournament was supported with Pepsi as the title sponsor. Other top brands associated were TVS – which provided a bike to the Man of the Series. Cricket equipment and gear were given by Spartan Sports.

India-Pakistan Series for the Specially-abled

MS Dhoni and star footballer Baichung Bhutia are the brand ambassadors for ‘Hip Hip Hurray’, a joint initiative of Rhiti Charitable Foundation along with NGOs Magic Bus India Foundation and Gunj Parivar. As a part of the initiative, panchayat-level football tournaments took place at 4423 panchayats in Jharkhand to identify and groom the local sporting talent. The aim was to select 8800 youths from these panchayats and train them in football.