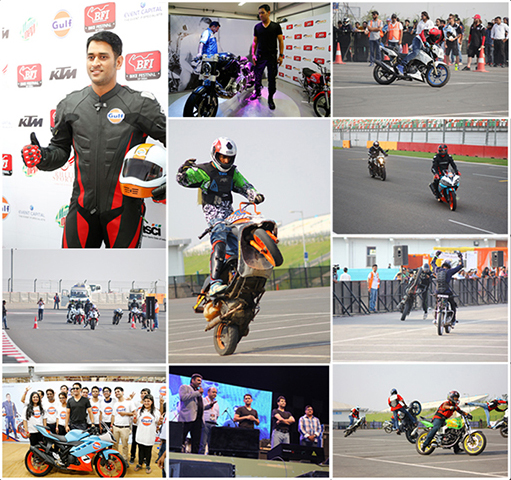 BFI also showcased a special pit garage for Mahi which had 12 bikes from his personal collection on display including the very famous and rare model, Confederate Hellcat X132. Mahi visited his pit stop and thereafter put on his biking gear to hit the track. It was a spectacular sight to watch him ride as the crowd’s roar resonated through the circuit.

Commenting on the festival, Dhoni said, “This initiative was to get together all the bikingcommunities and at the same time to raise a safety awareness through the ride. We wanted to give everyone a stage. I am really thankful to everyone who organized this festival and making it a memorable one for everyone.”
The final day of this two day extravaganza witnessed hundreds of bike enthusiastsfrom across India perform some jaw dropping stunts. Bikers contested for the finals of the first ever XDL India Championship, the biggest championship for stunt biking in the world. The winners will feed into the XDL World Championship to be held in 2015. Other racing events of the day included finals of Drag Championship and Top Gun – to create the best lap time record at BIC.
Atinder Jeet and Anirudh Rived won the XDL Championship finals, which were being judged by stars of stunt biking, Chris Tice & Aaron Twite. Drag racing championship had 28 participants whereas the Top gun saw 22 riders battling it on the tracks for a podium finish organized by Rongom Tagore, Founder Elite Octane.
The three winners in Top Gun Championship were Imran Khan, Simran, and Gurvinder who recorded the fastest lap time in 3 different categories (250-400CC, 650-800CC, 1000CC and above respectively). Drag Champions announced were Rizwan Khan for two categories and Riyaz Khan recorded the fastest time. Mohammed Riyaz won the wheelie class drag championship.
The final day of the festival also witnessed some scintillating musical performances from leading bands like Parikrama, Midival Punditz, and Tides of Nebula amongst others.
BIC, which has hosted the Formula 1 Indian Grand Prix in the past, was a perfect place for these adventure junkies, who showcased incredible stunts which were applauded greatly by the crowd.
Mr Arun Pandey, CMD, Rhiti Sports said “Bike festival of India is an initiative to bring together people with passion for biking. First edition of BFI received enormous love from public and the biking community. I am hopeful this trend will only grow as we move forward for the next edition. Also, it is a great opportunity for Indian bikers who got a big boost through XDL Championship.”
While adventure was an integral part of BFI, the most unique feature is that it accentuates the importance of safe biking. For the same cause BFI also hosteda month long safety ride covering every nook and corner of India (a total of 8170 kms in 30 days). Bike Festival of India is the first biking event to be regulated by a motorsport body, FMSCI. BFI was powered by Gulf Oil, Courage Partner – Mountain Dew, festival Partner – KTM.
It was also supported by other partners like MTV Indies, NDTV Good Times, Crowne Plaza, Event Faqs, XBHP, Autocar, Radio Mirchi, Franchise India,DSN,Ride till I die, Natura, Flyboy, Shoesonloose, Studio34 and Laqshya media
The pulsating races incorporated with a deluge of engaging activities have been the main forte of this mega event.
Posted in:
Business Gear Internet Marketing Mobile Online Popular
Get it Register with Rhiti Sports to get recent updates on Celebrities.
Its a premiere sports and special events marketing company working towards being the leader across various sports verticals & be a one stop shop for everything in sports.

Making a positive first impression is essential to developing a strong customer relationship. Ekko is powerful enough to assist any small businesses.